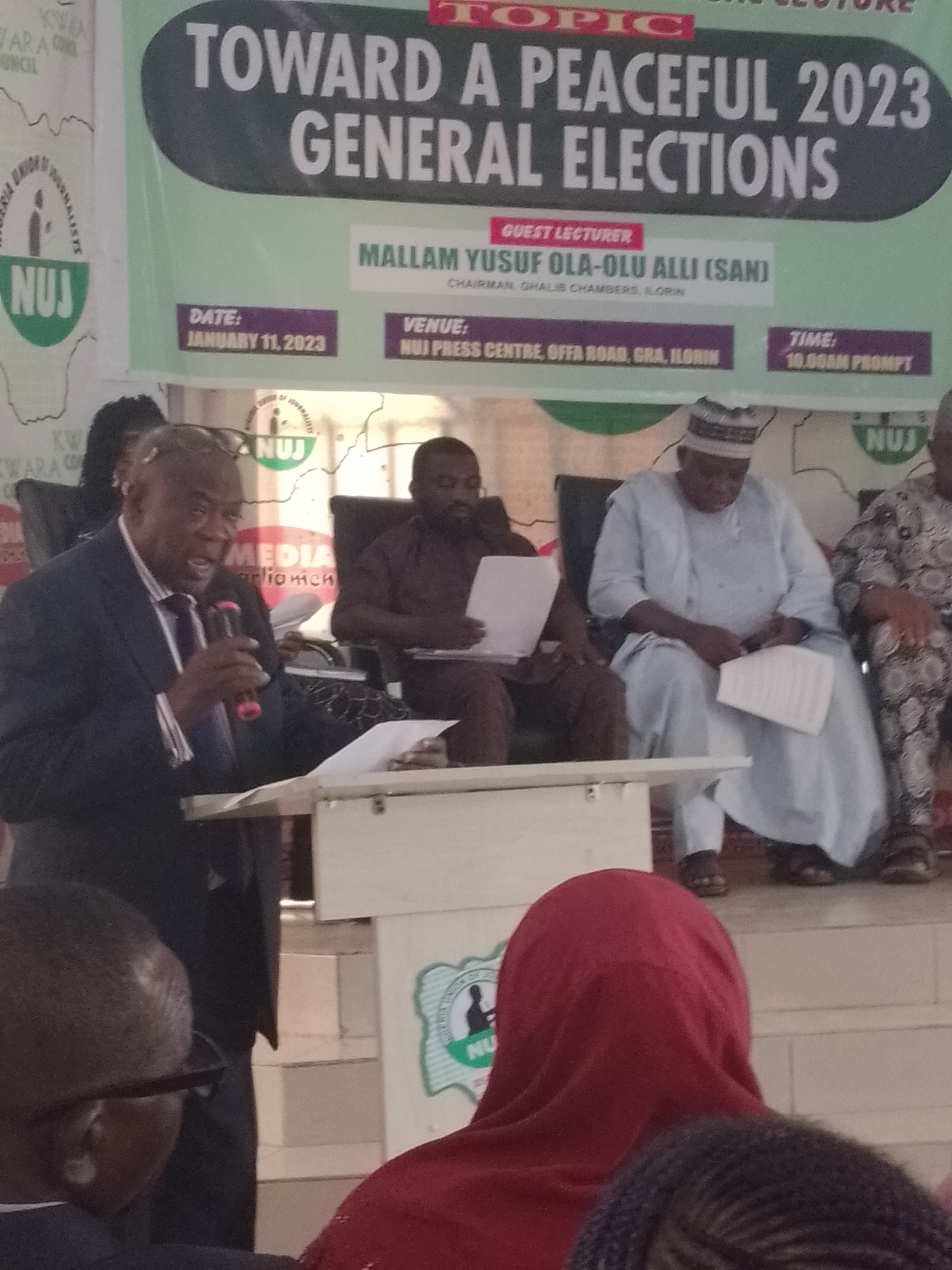 Constitutional lawyer and Senior Advocate of Nigeria, Yusuf Olaolu Ali on Wednesday said the nation’s Electoral Act and laws are quite adequate to prosecute genuine and democratic elections if all stakeholders learn to play by the rules and avoid undermining all electoral processes.

Nigerians, he said, should not sit on the fence and should, rather than fighting over elections disputes get copies of the Electoral Act and approach a tribunal “as laws are adequate to take care of all grievances”.

The legal icon was speaking at a public lecture of the National League of Veteran Journalists (NALVEJ), Kwara state council in Ilorin, on the theme: “Towards A Peaceful 2023 General Elections.

Represented by a lawyer, Mr Haruna Mahmud, Ali said that election is very important and constitutional in the nation’s democratic governance, while the Electoral Act has stipulated processes and laws governing elections, unlike what obtained in the olden days when people had to fight to win positions.

Speaking, the Resident Electoral Commissioner in charge of Kwara State, Mallam Attahiru Madami allayed the fears of Nigerians over the forthcoming 2023 general elections, saying the elections will hold as planned. He charged Nigerians to be responsible and avoid violence to ensure peaceful polls.

While assuring the political parties of an unbiased process in the elections in the state, Madami said that one of the reasons for violence during any election is when the umpire is biased.

He also identified the presence of adequate security; involving all law enforcement agencies, as a measure to achieve peaceful conduct of the elections.

“Let’s sustain the peace in the state. Elections can be violent when the umpire is biased. Adequate security should be provided and be civil. INEC has assured that election will hold despite the doubts by some Nigerians. Youths should be admonished to shun violence. Women should do that, especially mothers. We should all preach unity. Violence will take us nowhere,” he said.

Governor Abdulrahman Abdulrazaq of Kwara State, who was represented by his special adviser on Strategy, Alhaji Saadu Salahu, restated his administration’s continued support for the media and newsmen, serving and retired in the state.

He said his administration is committed to a peaceful coexistence of the people of the state, adding that Kwara state remains one of the most secure states in the country as attested to by the Inspector General of Police during his recent visit to the state.

The governor highlighted the achievements of his administration in health, education, road infrastructure and civil service sectors, saying that efforts were being intensified to industrialize the state and ensure regular electricity supply.

Chairman of the occasion, Professor Olu Obafemi, who described the theme of the lecture as very apt, said democracy could not thrive if there are no free and fair elections.

He urged Nigerians not to vote along ethnic and religious lines to safeguard the unity and development of the country.

In his goodwill message, the Emir of Ilorin, Alh Ibrahim Sulu-Gambari, who was represented by the district head of Owode, Alh Sidiq Kayode admonished Nigerians to peaceful before, during and after the elections.

Earlier, the chairman of NALVEJ, Alh Tunde Akanbi, had appealed to the political class to play politics according to the laid down rules and regulations.

“Since we still have 44 days to go to the polls, precisely on the 25th, February 2023, politicians and their supporters can have a change of mind. I mean positively for those that still hold the erroneous belief that it is either them or the elections will not hold. I also plead with the youths not to allow themselves to be used as weapons to truncate the elections while social media/online handlers should guide against any act that can set the nation on fire before, during and after the polls.

“To the umpire of the election, INEC and security agencies as well as the judiciary, including the media, we urge you all to maintain neutrality and allow the will of God and that of the electorate to prevail,” Akanbi added.