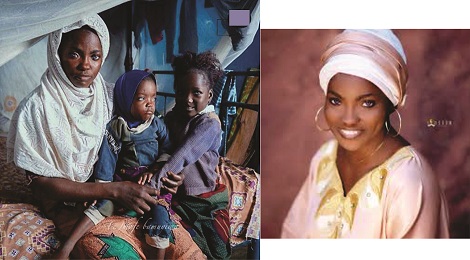 The story caught my attention as a paediatrician and a mother. My first reaction was to organize a meeting with husband and wife's family to educate them.

However, I had my doubts about the story. This was mainly due to the fact that Risikat had the said eyes from birth and husband married her with same. And went ahead to have three kids. I started to wonder about the initial story more and more as husband, Abdulwasiu was interviewed and told his own side of the story.

Now, what followed was what I didn't prepare for. The family were turned into stars with all kinds and shades of people trooping to the poor neighborhood where she lives with her parents. Politics also came in and we have heard all types of promises from the family and social media.

The young family of Abdulwasiu and Risikat suffered from financial shocks that arose from the admission of the twins they had close to two years ago. That was her second birth and the babies were born prematurely. They ended up at the University of Ilorin Teaching hospital neonatal intensive care unit. The family spent all they had and sold practically all they had. Thereafter, one of the twins died.

Risikat had difficulties coping with no food and other necessities. She moved back to her parent’s house. Yes, hubby isn't a saint and his family didn't do their best for the young couple, however, it was the lack of sustainability that led to the crises.

From the stories told, I am sure this is obvious. Both Risikat and her husband are not educated. Risikat(dropped out of doing WAEC because of lack of money) had a small patent medicine shop which crumbled during the said admission of the twins. The husband is a vulcanizer and owns a bike. Do you see the family dynamics? There are millions of young families like this in Nigeria without social security. No health insurance and no support for the kids too.

I am therefore surprise at the media hype and storyline without anyone stopping to ask questions. I suspected some people wanted to gain from the story and exploitation of the naive lady had started in earnest with someone appointing herself as her manager and another her lawyer. She has suddenly become a big company that needs to be managed. And percentages are already being discussed. Sad.

What the family needs is a means of livelihood. Get a ‘Marwa’ for the husband and get a patent medicine shop going for the wife. Support them with a little cash and food stuff. If assisting them with accommodation is on the table, do so in an area they can sustain in the next two or three years.

Some of the most absurd things I have heard in the saga is that the kids will be placed in a high brow school where hundreds of thousands will be spent. By who and for what purpose?? Even I won't send my grand kids to such schools! Help the family put the kids in a school they can go on paying themselves in the next two years. Don't create a false status in the family and throw them into disarray. Assist them realistically and in a way that is sustainable. Don't widen the rift in the family by pulling the lady further from her husband. Talks about relocation to Lagos to model smack of attempts to explore, expose, use and gain from the lady. At the end she is dumped!

Can you locate the lady and her kids?? Ordinary people. Let them go on with a better life in peace.

Instead of running to each case that's hyped in the media, my prayer is that government becomes more responsible towards providing basic education, universal health coverage, good housing, portable water and social safety nets for its citizens. This is not about Kwara state alone but Nigeria as a nation. Our citizens deserve better deals.

Professor Aisha Gobir is a Professor of Paediatrics, University of Ilorin.