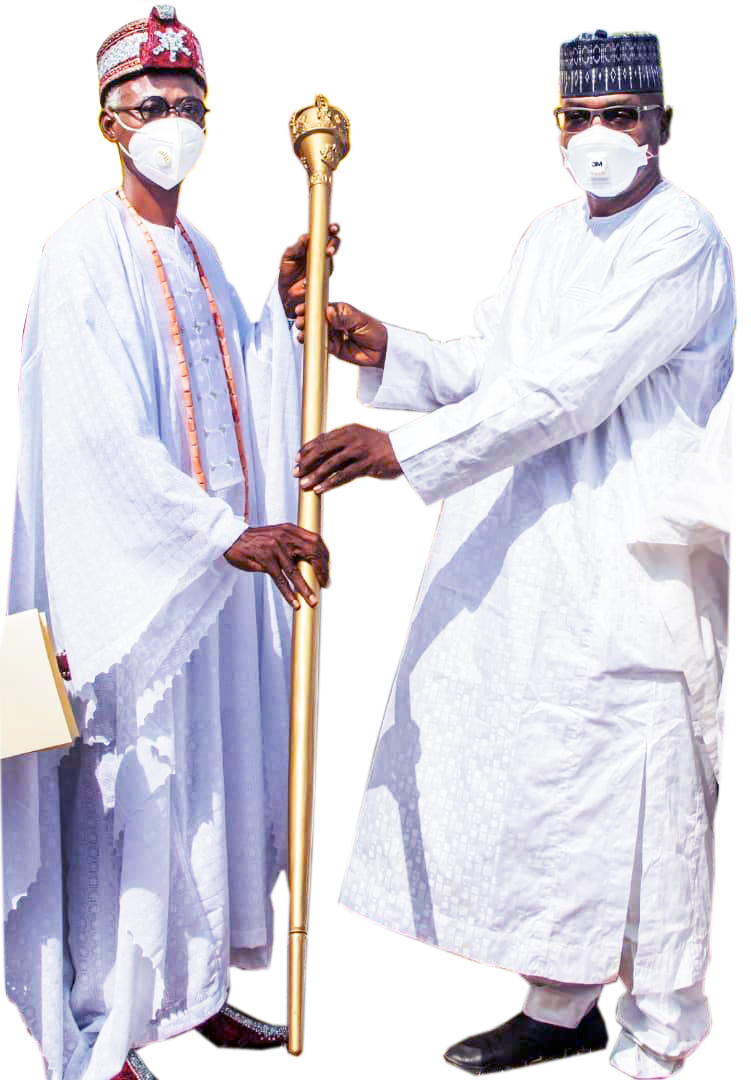 Like the biblical Mount Olives and the  prophecy of of its future engagement,  Ademola Julius Ajibola, also known as Mount Olive is set to fulfil his destiny as the new Olusin of Ijara Isin, almost five decades after he was bundled out of the family house with his mother, in the aftermath of the death of the father.

Oba Ademola Julius Ajibola is not an ordinary being by any means. Rich, affable, humorous, overtly generous and always on the social radar. Thus when the people of Ijara Isin announced his name to succeed Oba Omoniyi Banigbe Atobatele II, the late ruler of the community, not a few of his acquaintances were at a loss how the top-of-the-range life of the foremost business icon and industrialist would fit into the rural, rustic environment that the obaship would offer.

As news hound, we had sent messages through his aides and friends and even personally to his mobile phone to seek an interview without response. We thus set out to bludgeon our way into the privacy of the new Kabiyesi in his homestead right there in Ijara Isin.

Armed with our well prepared questions, we had sought to take a look at his background- growing up as a child, school, work and business. How it was in the beginning; we wanted to know the turning point of his life and how it happened; we wanted to know if it ever occurred to him that he would be Olusin of Ijara Isin one day and what he thought gave him edge over other aspirants. We wanted him to talk about the last Olusin from his family; to tell us those stories he was told or know. As the would-be custodian of the people’s history and tradition, we wanted to know if he had heard story of any spectacular thing about him. Perhaps the traditional seers may have said he is a re-incarnation of his progenitor!

Most importantly, we wanted to know how he would handle some conflicts that naturally arise between some traditional practices associated with his office and his Christian faith.

Again, being a foremost industrialist, we wanted to know how he intends to woo investors to make Ijara Isin investors’ destination and, given his huge and wide investment in business, whether his position as an Oba would not impinge on the fortune of his businesses.

Here we are in Ijara Isin. We waited for the King to return from his first meeting of the Isin traditional Council which we were told had been on since morning. Momentarily, we saw a surge of dust and a state-of-the-art Mercedes Benz AMG E43 4Matic surfaced on the horizon. All rose to welcome the King.

Ever gracious and genial, he alighted from the vehicle with all the trappings of a sure-footed king to the waiting prostration of all. As he prayed for all in turns, he noticed a bosom friend, Engineer Adeolu Sayomi who he would later teach how to greet and make obeisance to a new king, in the traditional way, insisting that he must relate his message to the ‘inner circle of the palace’. Sayomi, while digging it with the King prostrated again to the admiration of all for imbibing the new lesson in tradition.

Now settled down, Kabiyesi inquired of our mission to his homestead and we explained. We told him we had come to goad him to tell the story of his life, so that people will know the imperatives of selfless service and sacrifice and, the obligations which a passing generation owes the future generation that would succeed it in history. Of course it was our candid reason for the special interview, given the little we unearthed of his life.

We had expected a positive response from whom we thought, beyond his affability, was a highly cerebral and congenial mortal, but what we saw was a self-effacing enigma whose coronation ceremonies he said, would be devoid of all the affluence and trappings of the man people know as the ‘money-bag’. “Low-key, is the word”, he said.

Perhaps stemming from his typical modesty and not used to blowing his trumpet, he explained that an idea of a huge, luxurious coronation ceremonies was preposterous when his community was in dire need of development. Forward planning, rather than a vainglorious exercise, would be more proper. “What you people have come to do is mere vain-glory and I won’t be part of it. I know you also want to shore up your company’s income through adverts. I would prefer that my friends and well-wishers put the money in Ijara Isin Development Fund account. I won’t grant any interview or indulge your wish for now. I will do it at the appropriate time”

But Oba Ajibola yielded the story of his life to us perhaps, subconsciously. For those who know the Ahmadu Bello University Alumnus whose life transcends between working-hard and living-good, he is a consummate conversationalist with an encyclopedic mind. He told us the story of young Julius in Ijara Isin, who at about six years old, shortly after the death of his father, witnessed a most morbid experience of how his uncle, the eldest and richest in a family of six parked his choice Peugeot Saloon car in front of the family house, hollered his mother to his presence and ordered that she moved her belongings out of the house. Like the biblical Joseph, Julius sojourned with his mother in other lands, found his bearings in the sea of life and is now returning as the new Olusin of Ijara Isin. He has returned to salvage the little that remains of the antiquity where his mother was ordered out, explaining that he has decided to remold the building into a modern residence that would house the six original children of his forebear.

He told us about his encounter with His Eminence, the Emir of Ilorin when he went to formally present himself to the Chairman of the State Council of Chiefs. He told Emir how fortune has smiled on him in his emirate and that he was ready to return home to bring his community to enviable heights. He narrated how much Emir was pleased with him, his fervent prayers for him and his community and the expensive gift the Emir gave at his departure. 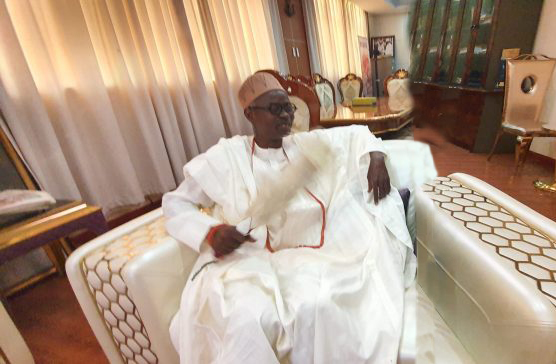 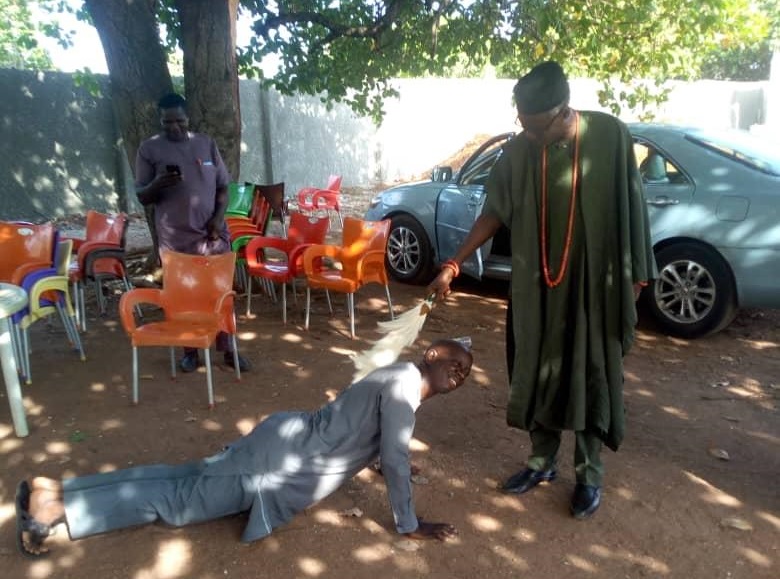 He was not done with us. He came back to our proposal on publishing a special report in the print copy of our newspaper that will debut in December, coincidentally with the coronation. “So you want to use me to make money for your newspaper with that trite, un-business-like proposition? If I were you I’ll prepare something more ingenious. Imagine if you had prepared something that offered the community at least, certain percentage of your rake in this business of promoting me. How would I have turned down such a win-win situation where you’ll make something for yourself and there‘ll be something for my Ijara Isin Development Fund account, through my friends and well-wishers? To me, this is the way to take advantage of a situation in business” He concluded.

When we said we were ready for a deal, Kabiyesi still turned down the offer, insisting that time was not ripe for him to tell the world the story of his life. For us, in all these, something surmised: beyond the lithe, tender body of Oba Ajibola is a man whose place is in the realm of ideas; the brainwork, as it were; one that would put his brain at your disposal for formation of schemes and strategies and allow the muscular ones to carry them out. In that brief encounter, he taught us a life-long lesson in imagination and resilience because, as he said nothing cannot be achieved if you set to your mind at it. Even our special report is still possible, he joked.

Today, he controls a business conglomerate spanning commodity distribution, mining, banking, agriculture and manufacturing, with over 400 employees. Not too long ago, shortly before he turned 50, he told us, he had mooted the idea of retiring from business because all his outfits have been put on auto-cruise. He had worked so hard and needed respite. We wanted to ask him if he had built enough egg nests to contemplate retirement at such odd age but we thought Kabiyesi was too engrossed in his passion, the business world, to entertain interference. But, he offered us an answer nonetheless, without prodding.

He explained that though he has moved away from his businesses, he has a fantastic and dependable heartthrob, Betty, who has always kept the home and business fronts. He said he however discovered that what he thought were mere pastimes as he moved away from business have also come out to be good business outcome. His wife, he said, has not only been the pillar of his strength but behind the humongous successes that have trailed the conglomerate over the years. He talked about her business acumen and the entrepreneurial spirit she has creatively applied to sustaining their investments.

Kabiyesi explained that he has an unconventional life style. Call him a bohemian if you wish; one you see as archaic and old-fashioned in dressing and some worldly affairs but nonetheless yuppie and ritzy in a most astonishing way. Take his love for automobile, for example. Oba Ajbola unabashedly told us that he is an automotive freak; one with more than passing interest in cars and motor vehicles, generally. He confessed that he takes great pleasure in enjoying and appreciating cars for reasons beyond their basic utilitarian value of simply transporting people. His love for automobile, he said includes the industry that produces them and the culture that surrounds them. No wonder his garage houses such sleeky German bests of the Mercedes Benz, the luxurious Jaguar in the X-Range, the Chinese top brands and others.

But he also clarified that his love for cars is actually a way of mollifying himself. It is a means of compensating for his all day, all year round devotion to work, to the extent that people are now looking at him as being too unconventional.